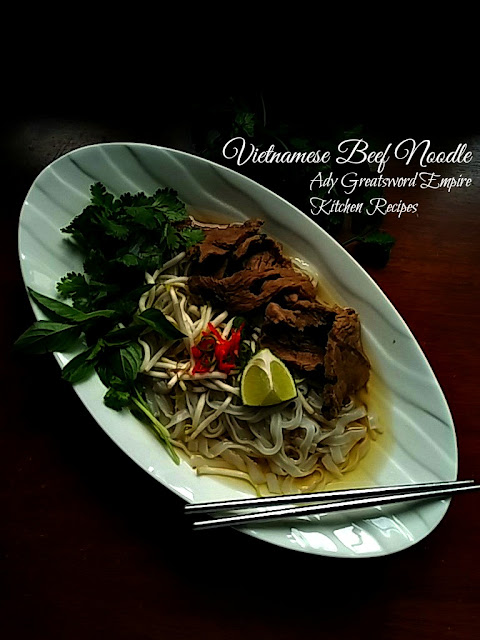 NOTE : All images are the property of Ady Greatsword Empire Kitchen Recipes and any reproduction is strictly prohibited. Let me make this clear: PLEASE DON"T STEAL MY PICTURES or IDEAS( Presentation), it's not cool aND it's illegal
Ingredients
For the Vietnamese pho broth
600g of onions (about 3 to 4 medium sized onions), split in half
200g of ginger (about 12 cm long ginger), split in half lengthwise
2.5kg of beef (shin + leg bone), cut into 2 cm thick slices
½ kg of beef brisket, cut into 10cm pieces (weighted after trimming)
2 star anise pods (20 star points in total)
10 cloves
10 cm long cinnamon stick
2 teaspoon of fennel seeds
2 teaspoon of coriander seeds
35 g of salt (about 5 teaspoons)
60 g of Vietnamese fish sauce (about 4 tablespoons)
30g of rock sugar
To serve:
800g of dried or fresh pho noodles (divided into 8 bowls)
500g of sirloin, cut thinly against the grain
1 medium onion, sliced paper thin
3 stalks of scallions, cut into thin rings
3 sprigs of chopped coriander leafs
Ground black pepper
Garnishes arranged alongside the pho bowl:
1 sprig of spearmint
1 sprig of Thai basil
1 sprig of cilantro
200g of bean sprouts
Thai's bird's eye chili cut into thin rings
A few lime wedges
200g of fish sauce, plus more to taste
2 limes, each cut into 4 wedges
Instructions
Place a wire cooling rack over the flame of a burner, set to high heat. Place ginger and onions on the rack and turn it occasionally until the skin becomes slightly blackened on all sides. It will take about 10 to 15 minutes.
Place the bones in a stockpot and immerse in cold water. Bring to a boil over high heat. Boil vigorously for 5 minutes to allow impurities to release from the bone. Tip the bones into a sink. When cool enough to handle, rinse the bones under running water and carefully remove any debris from them. Clean the stockpot, return the bones to the pot.
Add just enough cold water to immerse the bones. Bring to boil over high heat, While the broth is boiling, skim off any impurities on the surface for 15 minutes to ensure a clean, clear broth, then reduce the heat to a low simmer. Add brisket, charred onions, ginger, star, anise, cinnamon, fennel, cloves, coriander, fish sauce, sugar, and salt.
Gently simmer uncovered for 1½ hours. When the brisket is tender, remove it from the broth and place it in cold water to cool. Drain and keep in the refrigerator for use later.
Continue simmering for 3½ hours, top up the water as necessary to just immerse the bones.
Strain the broth through a fine strainer. Discard the bones and the spices. Adjust the final volume of the broth to 4 liters. Skim off the oil on the surface as much as possible. Season the broth with additional salt, fish sauce and rock sugar if desired.
Blanch the rice noodles in boiling water for 20 seconds. Drain, then transfer back to the bowl. Place a few pieces of beef brisket and raw sirloin on top of the noodles. Bring the broth to rolling boil. Ladle the broth evenly over the raw meat and other ingredients.
Garnish with spring onion and coriander to each bowl.